IS EVOLUTION TRYING TO DO AWAY WITH THE CLITORIS? [1892]

Once Upon A Time both males AND females were targeted for genital cutting in the name of  ‘medicine.’ 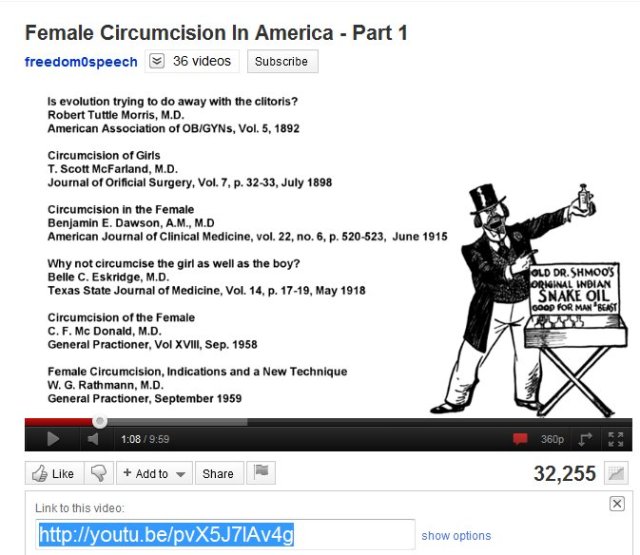 Degenerative theory of disease and the notion of reflex neurosis
For reasons unrelated to the rise of the American middle class, two French physicians in the 1820s, Xavier Bichat (1771-1802) [2] and Francois Broussais (1771-1838) [3], developed a new model of disease – the theory degenerative disease. This model postulated that the human body was allotted a finite amount of vital energy which could either be conserved through correct living or permanently lost through wrong living. Energy depletion led to degeneration, which in turn led to the production of disease. Middle class American physicians readily adopted this theory, but they expanded it to imply that manifestations of sexuality necessarily represented life-threatening losses of vital energy. Non-procreative use of the sexual organs, even within marriage, was viewed as dangerous. The result was the formulation of the Reflex Neurosis Theory of Disease, which postulated that the sexual organs and the erotic sensations they produced were the cause of all human disease.

For those who are interested in the history, Robert Darby’s and David Gollaher’s scholarship and works are notable, but nothing speaks as loudly as the historical texts themselves.  One can see that assumptions were made based on existing theory; that evidence was anecdotal sharing of case studies; that speculation was rampant; and that there was nothing ‘scientific’ about the ‘medical’ origins of forced genital cutting.  This presentation and following discussion, IS EVOLUTION TRYING TO DO AWAY WITH THE CLITORIS?, is a perfect example of the anti-sexual devolution of medicine in the 1800s which, at least in terms of hopeful speculation about the benefits of sexual assault on male genitals, continues to the present day.

What relevance does this have for intactivism?  Many women and men are quick to point out the medical myths such as ‘congenital phimosis’ and the perceived need for extraordinary attention to MALE preputial hygiene (perpetuated even in the American Academy Pediatrics’ abysmal Technical Report (p. e763) released in 2012) as a justification for forced genital cutting.  Consider this paper from 2008; 33% of college-aged women had clitoral hood [preputial] adhesions… yet rather than a call for research into the prophylactic ‘potential benefit’ of amputation in infancy, or admonitions for daily washing under (and forced retraction of) the clitoral hood, the authors concluded:

Adhesions may be more common than previous published reports imply. Study participants were evaluated for routine health screening and presented with few or no symptoms. These data suggest that adhesions may be a normal variant in otherwise asymptomatic college-aged women and that no treatment is necessary.

“No treatment necessary.”  Such is also the case for males who are “otherwise asymptomatic.”  As stated by Doctors Opposing Circumcision:

In reading this presentation and subsequent discussion, it is clear that the justifications for circumcision, clitoridectomy, and interventions freeing the ‘trapped’ clitoris shared a common concern, that ‘irritations’ to the male AND female genitals could have disastrous consequences.  Today we would rightly consider such interventions in the girl or young woman unmedical, unethical, and an invasive sexual assault.  It is time to acknowledge that boys deserve the same protections from circumcision– an amputation founded not on science– but rather on the same 1800s anti-sexual quackery which targeted the genitals of both sexes.

From the “Discussion” section:

Dr. W.P. Manton, of Detroit.- In my consultations with insane patients I see every year a large number of women, and the majority of insane women, as is well known, are masturbators… To arrest secondary degeneration I have in certain cases removed the ovaries, and with good though not perfect results… a great many patients, especially males, that are afflicted with preputial adhesions are of the neurotic type. I have seen such cases; but I do not operate on males excepting in the case of young children.

Dr. A.H. Cordier, of Kansas City.- A few years ago Dr. Sayre advanced views similar to those Dr. Morris as propounded, and reported a number of cases, but his experience was confined principally to boys with adherent and inflamed foreskins. He specified clearly the class of cases in which benefit from circumcision could be expected, and surgeons who select their cases according to Dr. Sayre’s views are not often disappointed in the results following operative procedure. That a constant state of genital excitement produced by any cause in male or female may produce in the cord and other remote organs is, in my mind, a settled fact… I have in more than one instance relieved reflex nervous symptoms and thwarted permanent injury to remote organs by an early circumcision. I see no reason why the same truths should not be applied to the female sexual organs.

Here is Dr. Morris’ summary, for those who don’t want to scour the scanned pages:

Robert T. Morris MD, “Is evolution trying to do away with the clitoris?“, Transactions of the American Association of Obstetricians and Gynecologists, Vol. 5, 1892, pp. 288-302 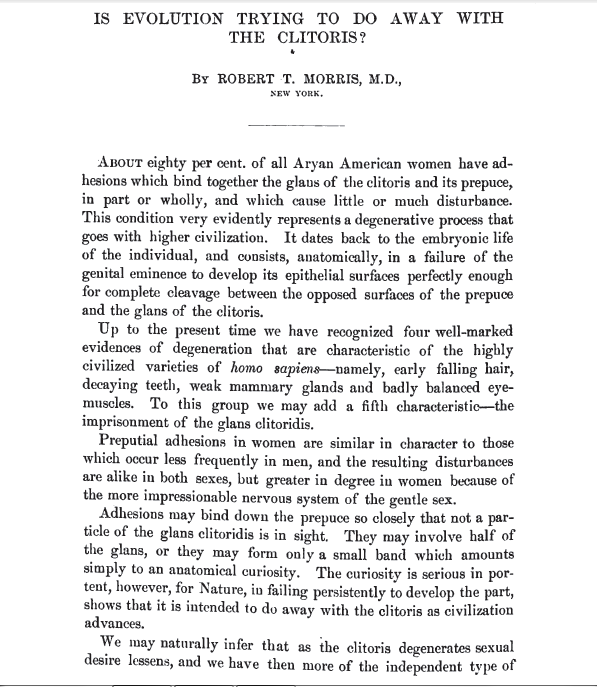 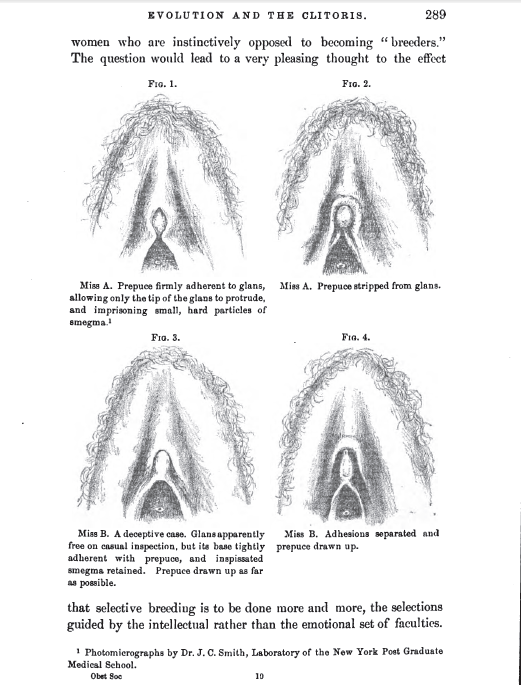 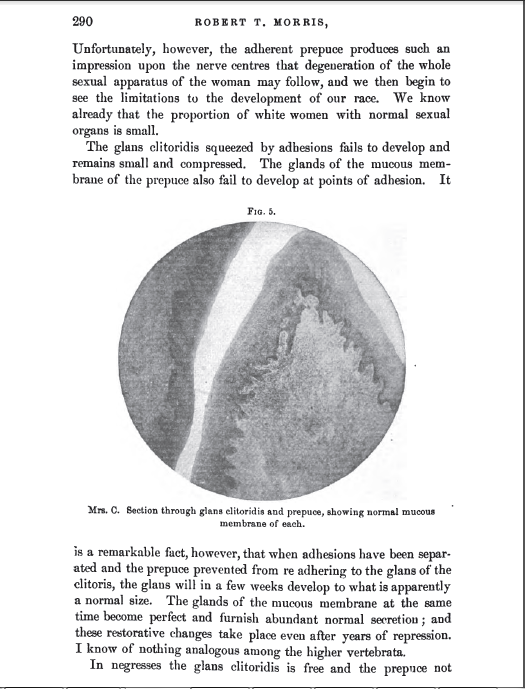 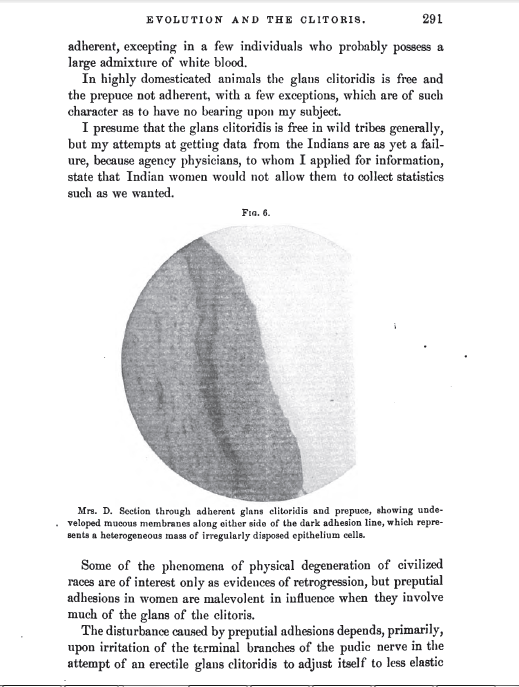 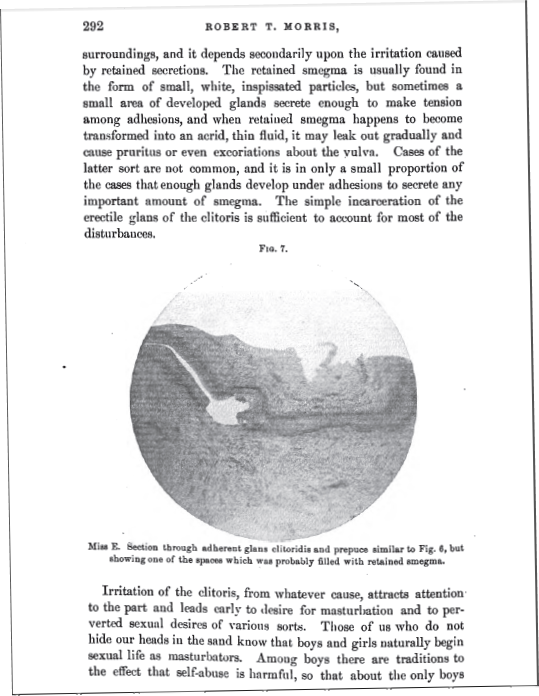 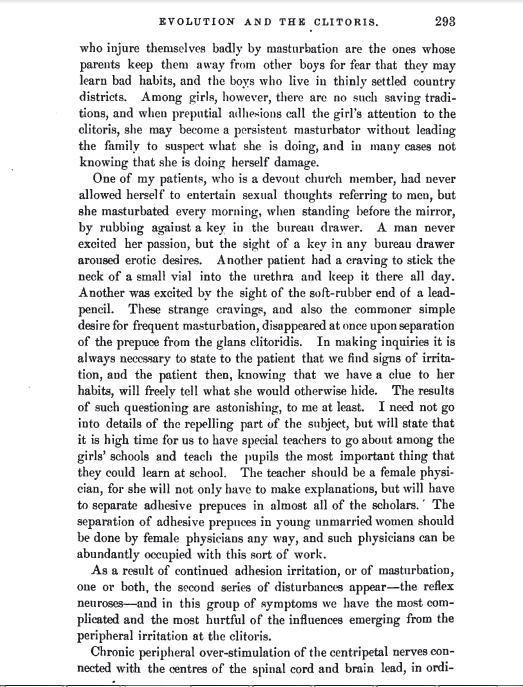 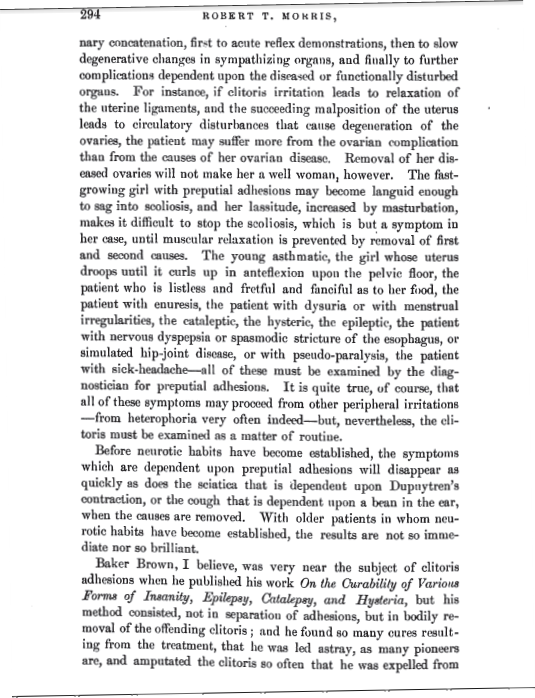 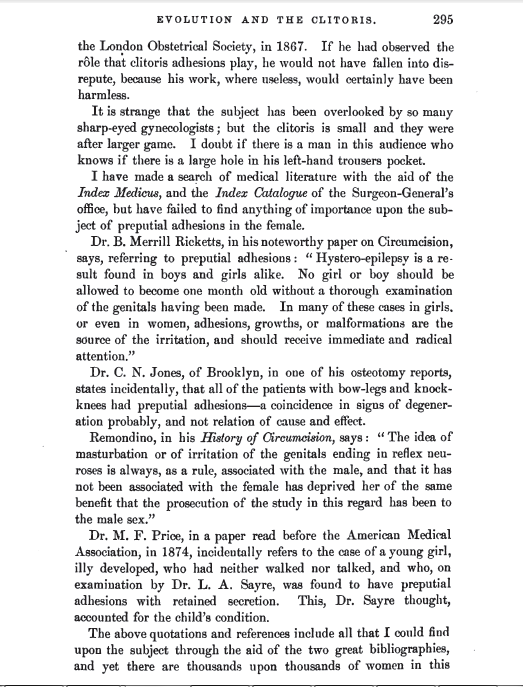 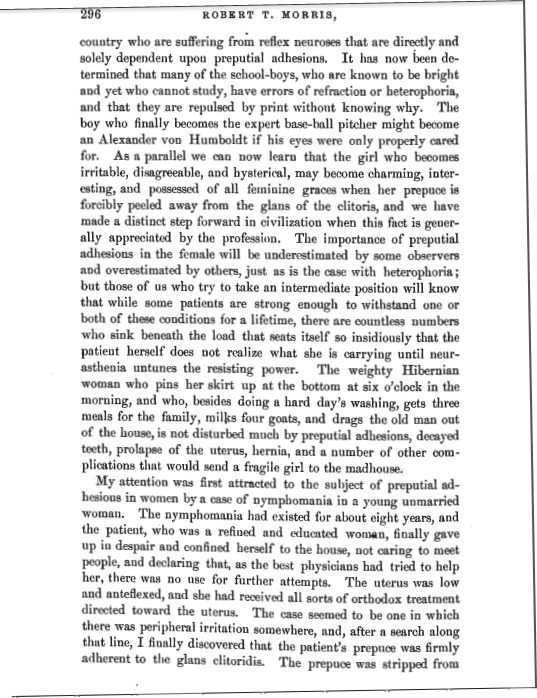 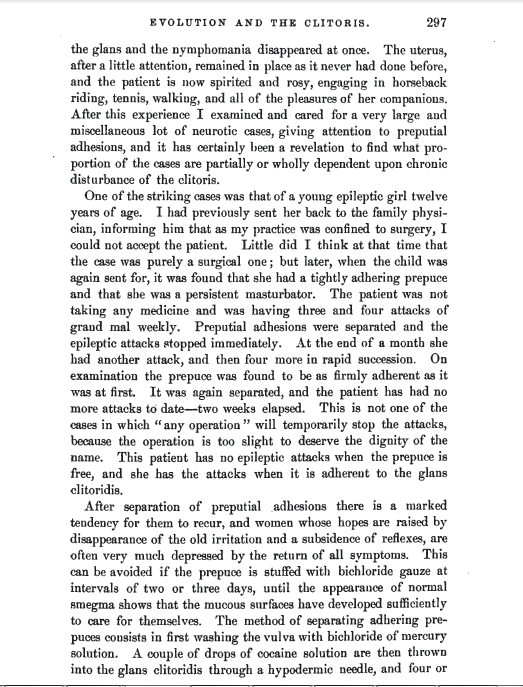 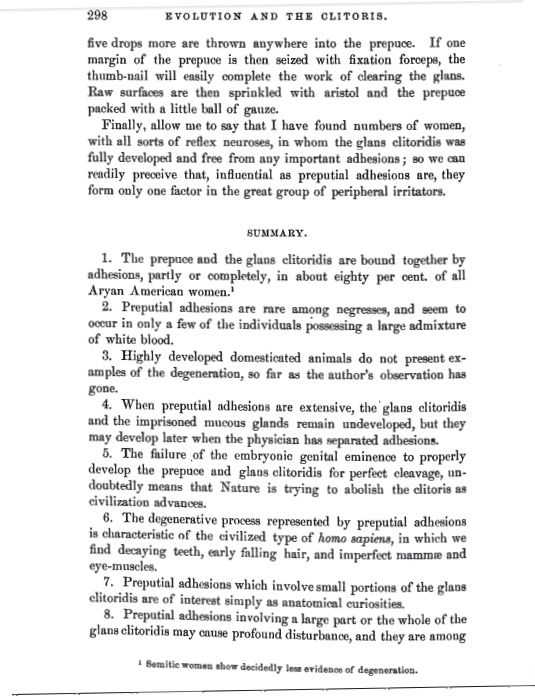 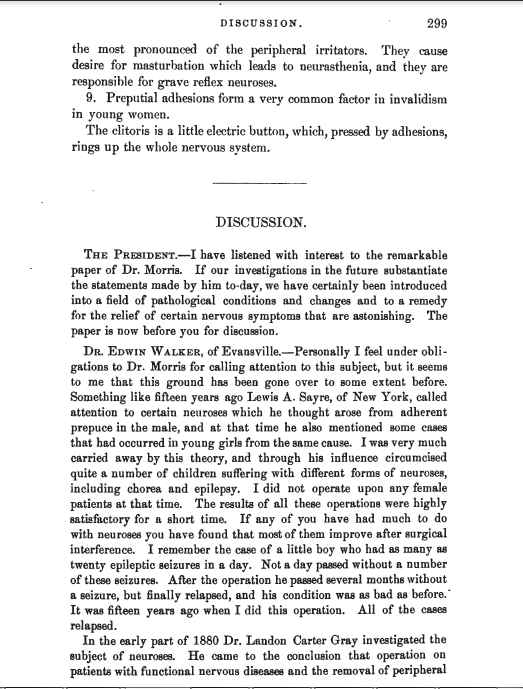 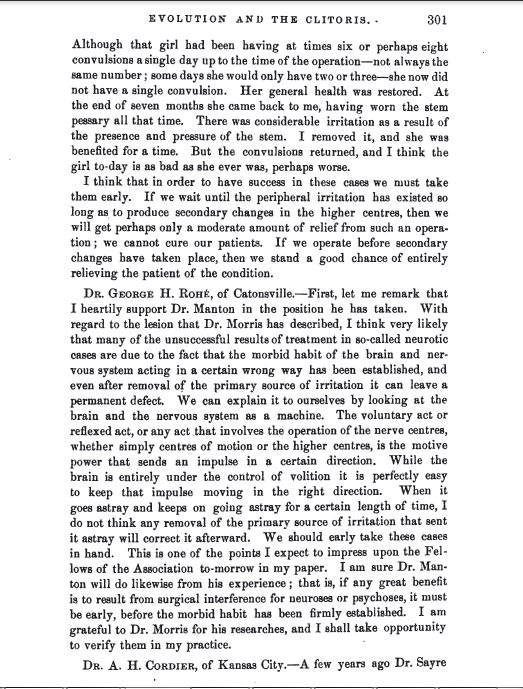 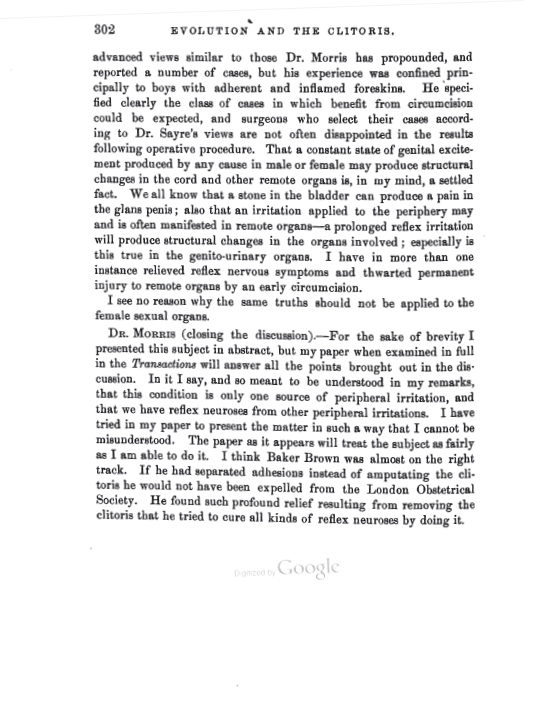 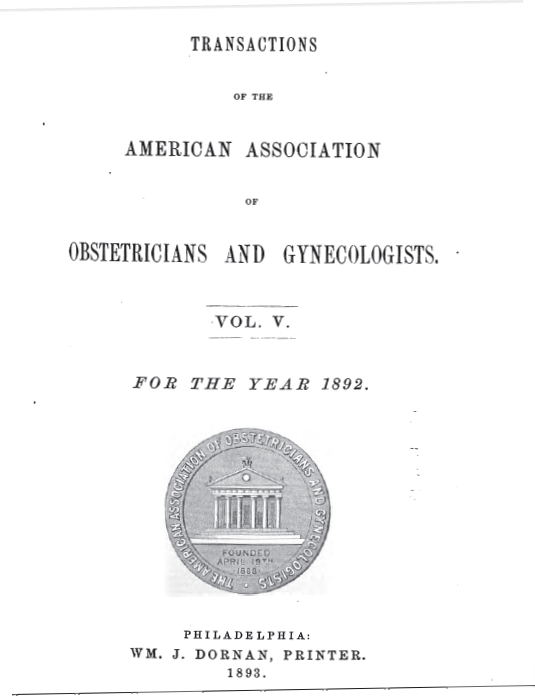