I thought to myself one day, “We need to raise the bar on our expectations of men.”   I started to sketch, and my thoughts shifted.  I’m not sure raising the bar is as important as showing just how low an expectation it is of any parent to spare a child from forced genital cutting and for doctors to practice actual medicine. 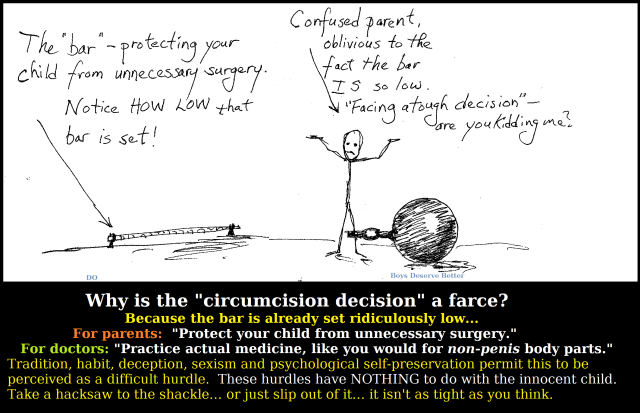 Usually the ‘debates’ devolve along common pathways.  There is no surprise in them.  One can get involved in battles over trivia, statistics, tradition… but these are just adjunct objections which can be debunked.  We must bring it back to first principles, even when discussing the statistics and ‘potential’ benefits so widely parroted, without investigation, both in the media and in our communities.  A child is not a tool to be used at parental whim or to be altered based on [hopeful] speculation by those who defend the practice of forced genital cutting.

The main cause for concern is that the psychological need to inflict this harm on an innocent child– and then to defend that ‘choice’– is not rational.  Many have been duped by the arguments presented by alleged ‘healing arts professionals’, but these are not the people who concern me.  They believed, because of what they’d been told, perhaps in spite of their instincts, that they’d done the best thing for their child.  They can be reached with correct and compassionately delivered information, despite the pain it may bring to them.

It is the narcissists who loudly spurt “I, ME, MY, MINE” when speaking about their CHILD’s penis who try to shut down conversations.  It is they whom we cannot allow to ‘get away with’ broadcasting false information and irrational defenses.  It is they who try to manipulate, cast aspersions and censor.

Perhaps we encounter those for whom “To each their own!” is the shut-down tactic.  To each their own opinions?  Of course they are entitled to their own opinions.  If they are based on misandry, ignorance and selfishness, however, we are entitled to weigh their opinions accordingly.  When their opinions mean children suffer, they should be accorded exactly the amount of respect they deserve.

The issues involving non-therapeutic infant circumcision are clear.  There are not ‘gray areas’ which demand special consideration.  The assumptions made about the ‘medical benefits’ or even ‘spiritual’ importance…. of forcibly severing part of a child’s normal, healthy anatomy, even were they proven to bear out for a few individuals, do not justify this ‘special’ treatment for this one ‘special’ body part at parental whim to serve THEIR own psychological needs.

Another familiar tactic to try and quell discussion is to trivialize our efforts.  On one particularly irritating day, I encountered this tactic twice.  It didn’t take me long to make this graphic showing just how ‘trivial’ trying to save infants from adults’ needs for genital cutting is:

Some believe there must be some compromise, as though human rights of male children [and the men whom they become] somehow matter less than other rights….

False distinctions are widely used.  We are told that MGC and FGC are vastly different.  This cultural blindness relies on both exaggerating the ‘medical’ benefits of MGC and ignoring its harms, while at the same time demonizing the practice of FGC.  Furthermore, a tradition of MGC is promoted as ‘spiritual’ while a tradition of FGC is deemed ‘barbaric.’ 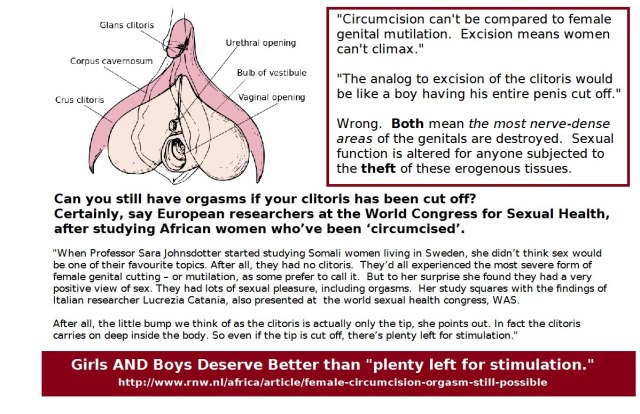 Here is a side-by side example of the “conflation” which we are warned to avoid in considering MGC in the same light as FGC.  Yeah.  SO HARD to see how one might confuse genital cutting… with genital cutting.  You can read more about these false distinctions here. 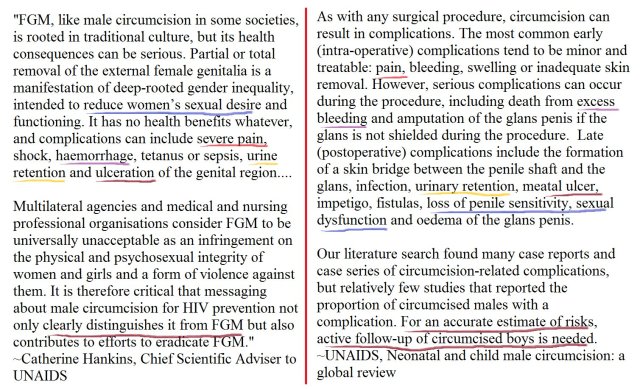 Non-therapeutic, non-consensual genital cutting, whether imposed on a male, female, or intersex child, is an alarming and painful reality.  That makes it unpleasant to write about or discuss on its own, but the emotional rampages one encounters make it especially difficult.  When confronted by [and allow an unscientific term here] exceptional butthurt, I find it useful to remember who might really be reached.  On our facebook page we allow for pretty open commentary.  One reason for that is that those who voice common misconceptions do us a favor.  They can be educated and they can also expose criticism of genital cutting to those who may have never really looked into it.

SOME pro-circ loudmouths believe all their friends must think as they do, that intactivism is a waste of time or stupid, but we know better.  We expect that some of their friends will be capable of rational thought… even when discussing penis cutting.  Their sons might be spared.  Write with them in mind.

There is no amount of evidence, no statistic, no opinion, no religious belief which justifies subjecting a child to the amputation of part of his penis without medically IMPERATIVE reasons.  I know my mother was NOT told that one of the risks was death.  Had she been informed of that risk (especially after all that she went through in having me at a young age), she would not have permitted it.  A ‘happy meal’, baby product or child’s toy which killed over one hundred children a year in the United States would be pulled immediately.

This ‘product’ is medically and ethically fraudulent, invasive, and it disrespects human rights and individual freedoms. It kills, while offering no benefit worth THAT risk.  The need to circumcise is a psychological frailty.  Children deserve better. 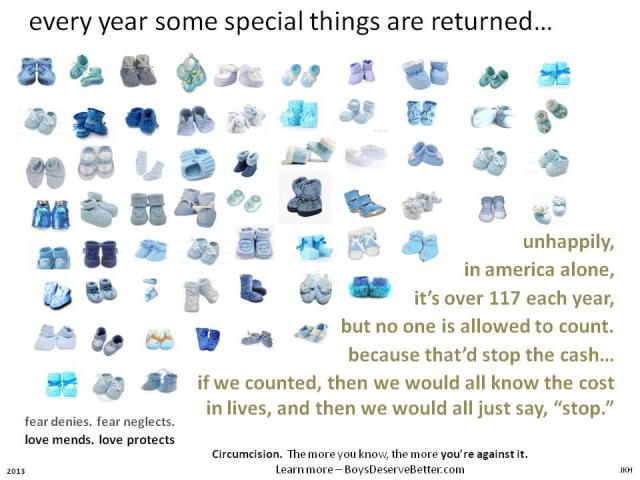 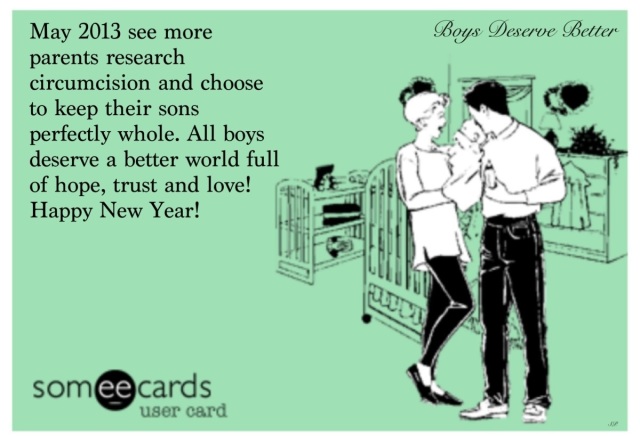 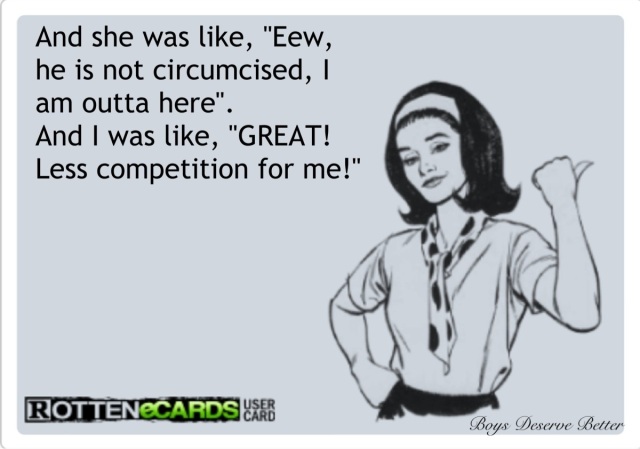 “It’s important for a son to look like his father.” This unsupported psychobabble is just as ridiculous as it sounds. Why this focus on matching penises, when his eye color, hair color, body shape and facial features may not match his father’s? It has nothing to do with the child’s needs, that much is certain.

“Son, I let you keep your complete penis.” is not a sentence which creates an identity crisis for the child.

The first time I saw my Dad’s * penis, when changing for a swim at a hotel pool, I can tell you what I noticed. It was big… and man, there was a lot of hair. Though he was circumcised, my impression definitely was NOT that our genitals looked the same. 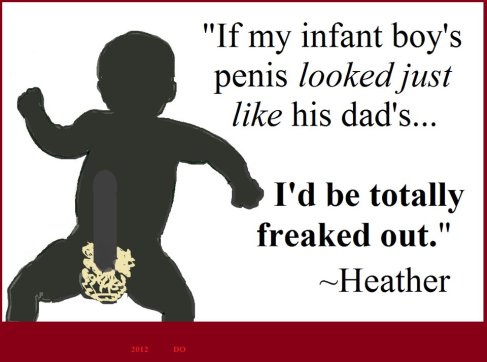 END_OF_DOCUMENT_TOKEN_TO_BE_REPLACED

My new car magnet, says it all.

This is one of the greatest articles on the subject of what a baby goes through when his parents choose circumcision. Happened in the 80s but nothing much changed since. Every parent should read this before deciding to circumcise their child. Photos speak for themselves. Follow the link to read the whole thing, and this is what you can expect:

“The following pictures were taken from a slide series depicting a routine circumcision of a newborn infant within a typical hospital nursery setting. These pictures were originally published in the December 1981 issue of The Saturday Evening Post and were provided by The Curtis Publishing Company (subsidiary of The Saturday Evening Post). The accompanying text was written by Rosemary Romberg.

10. The first part of the circumcision operation is called the dorsal slit. Since the opening of the baby’s foreskin is very tiny, it must be made larger before the “bell” part of the circumcision instrument can be inserted and the clamp applied.
First a hemostat, a scissors-like clamp, is applied to the end of the foreskin. This smashes and flattens a small length of the skin so that there will be little or no bleeding when the cut is made.
Tweezers are also used to lift the foreskin away from the glans and hold it out as the hemostat is applied.

END_OF_DOCUMENT_TOKEN_TO_BE_REPLACED

Boys Deserve Better than to have adults act on subconscious feelings that boys (specifically their “boy parts”) are somehow “dirty” and require immediate alteration.

Dos and Don’ts of carding

When I became an intactivist a year ago I learned about “carding“. I jumped at the opportunity to start spreading the message and ordered my first cards. I made a lot of mistakes in the beginning, learned from them and now present the Dos and Don’ts of carding, to make your life easier.

1) DON’T card like a maniac leaving too many cards on store shelves and in other open places. They are easier to spot, yes, but they are also easier to remove when employees discover them. Your cards will go to waste, won’t reach their potential reader, and will make the store people mad. Not what the goal is here.

DO put cards inside the merchandise instead. Pregnancy books, newborn baby items, maternity clothes, etc. work perfectly and are guaranteed to reach that expectant parent you are targeting. You cards are not wasted and no one gets mad when they are discovered, because they won’t. Hopefully.

END_OF_DOCUMENT_TOKEN_TO_BE_REPLACED

Let’s talk “carding”. It is as real as it gets when talking about real-life activism. Something you can do to spread awareness and help save lives, and still be discreet if that suits you better, or come up to people and talk to them while handing them your cards. You choose what works for you.

Here you can find most of what you need to know about carding:
“Carding includes wide assortment of baby, child and family health information – breastfeeding, babywearing, baby sleep, gentle parenting and discipline, informed vaccination, car seat safety, circumcision and intact information, among others. Intact information cards, specifically, are geared toward diverse demographics to meet people where they are in their genital autonomy journey.”

You can purchase your cards if that is something that would work for you better. One of the examples of what is available out there is over at Saving Our Sons.
END_OF_DOCUMENT_TOKEN_TO_BE_REPLACED

“A four-week-old boy “bled to death” after a home circumcision carried out by a nurse, a court has heard.

Goodluck Caubergs died the day after nurse Grace Adeleye carried out the procedure without anaesthetic, Manchester Crown Court was told.

The jury heard the 66-year-old only used scissors, forceps and olive oil at an address in Chadderton, Greater Manchester in April 2010.
Mrs Adeleye denies manslaughter by gross negligence.
The court heard the medic and Goodluck’s parents are originally from Nigeria, where the circumcision of newborns is the tradition for Christian families.

It is alleged the defendant, who is also a midwife, left a “ragged” wound that bled and her post-operative care was inadequate.
The family home, where the procedure took place, is a mile and a half from Royal Oldham Hospital.

Adrian Darbishire QC, opening the case for the prosecution, told the jury: “The allegation essentially here is that the care she provided in the course of that procedure was so bad that not only did it cause the death of that young baby wholly unnecessarily, but it amounted to gross negligence and a crime.”

Mr Darbishire said even a small amount of blood loss is dangerous and the loss of just one sixth of a pint of blood can be fatal for a newborn.”